This year I promised myself that I would get everything ready for Galaxy season and bypass the drama of trying to get everything together and working during prime AstroPhotography time.  I think I am mostly there.  My usual host of issues is back focus and the setup of the image train.  This is my Celestron OAG setup for the Celestron Edge HD 1100. So far it has worked out very well. One of the issues I came upon early was procedural.  I would get everything set up and forget to prefocus the two cameras, Main and guide before the evening imaging run and have to do that to get guiding functional.

Below are the images of my imaging train. In both from the telescope side back you will see the 2.2″ visual back adapter that came with the scope for use with the 1.25″ adapter. Next is the 1.5″ M48 Blue Fireball adapter sold by Agena Astro which connects to the m48 adapter on the OAG followed by the OAG itself then the M42 adapter.  I have a Baader filter slider followed by the ZWO ASI071MC Pro in the first image. In the second image it is the same all the way till the M42 OAG adapter then I have a 5mm  M42 spacer followed by the ZWO ASI1600GT Mono camera. Both these setups allow for the proper back focus of 147mm from the .7reducer to the camera sensor.  I also am able to focus both cameras which is as important as the back focus.

I hope this helps people who have a setup similar to mine. Clear and calm skies. 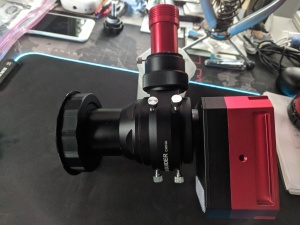